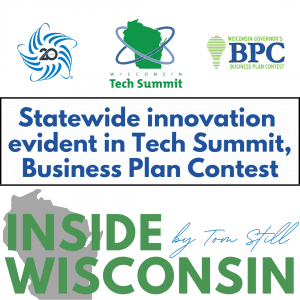 Few are surprised to learn that Madison and Milwaukee are hubs for tech-based innovation involving young companies. Visual evidence, surveys, rankings and studies have shown as much over time. It’s a familiar story to many Wisconsin observers but only now getting the national attention it deserves.

What may be surprising to some people is the extent to which young companies are springing up in places outside the state’s largest urban centers. Two statewide events illustrate the point.

When the Wisconsin Governor’s Business Plan Contest closed to entries about a month ago, there were 251 entries from 31 of the state’s 72 counties and 83 cities, villages and towns, which was a record geographic spread for any one year. The mix was impressive for another reason: 100 entries came from women, which demonstrates startups are not for men only, and 66 were from people who identified themselves as part of an ethnic group.

As the 2021 contest begins to move into its second phase, one-third of the semifinalists are women, one-fifth identify as something other than white, and 30 different communities are represented.

The eighth annual Wisconsin Tech Summit, to be held virtually March 17, is another example of entrepreneurism touching all corners of the state.

At its core, the Tech Summit is a business-to-business “speed date” event. If you’ve ever gone on a speed date, and even if you haven’t, you probably get the concept: A short meeting in which both parties exchange a bit of information about one another and break the ice, with the goal of moving to the next level… or simply moving on with no regrets.

While 29 of the 80 emerging companies hail from Madison or Milwaukee, the rest are spread among three-dozen Wisconsin communities as small as Lone Rock, Three Lakes, Suamico and Holmen, and as large as Green Bay, Racine, Waukesha and Appleton. The list includes a half-dozen young companies from Chicago and well beyond, an encouraging sign that others are hearing about Wisconsin’s assets.

The goal of the Tech Summit is to find areas of common interest – research and development, supply chain, sales, even investment or acquisition.

The meetings are purposely short to give the major companies a taste of what the emerging companies can offer, and to schedule as many meetings as possible for all concerned. Sometimes there’s a match; sometimes not.

Over time, according to Wisconsin Technology Council surveys, good things often happen after the young companies wrap up their major company sessions. About 40 percent of those meetings result in some sort of interaction afterward. Some follow-ups have produced major investments, strategic partnerships or simply targeted contacts with others who could be helpful.

The event is also open to people who aren’t involved in the speed dates, as they can hear from speakers such as Tracie Rotter, who spent 10 years at Google Ventures making those type of big-and-small business matchups happen, as well as panelists and experts who will offer their advice in a series of “office hours.”

As policymakers think about the post-COVID-19 recovery of the Wisconsin economy, one myth to be ignored is the notion that promising startups can only be found in Madison and Milwaukee. Entrepreneurism is spreading across the state for many reasons, not the least of which is innovation isn’t restrained by geographic boundaries, race or gender.

Still is president of the Wisconsin Technology Council. He can be reached at tstill@wisconsintechnologycouncil.com.