12 May ‘See you THIS time!’ Kwik Trip patriarch Zietlow to accept ‘Seize the Day’ award June 3 at ‘treps event 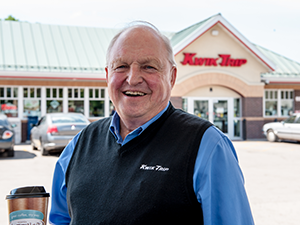 Don Zietlow, the president and chief executive officer of La Crosse-based Kwik Trip, will be honored during the June 3 Wisconsin Entrepreneurs’ Conference with the 18th annual Ken Hendricks Memorial “Seize the Day” award.

The award, which celebrates entrepreneurial leaders who have been crucial to Wisconsin’s economic growth, is named for the late Ken Hendricks, a Beloit businessman and 2006 “Seize the Day” award winner who died in an accident in late 2007.

Kwik Trip opened for business in 1965 and today employs more than 30,000 people in 768 stores while serving 8.5 million guests per week in Wisconsin, Minnesota, Iowa and Illinois. A vertically integrated company, it makes and ships more than 80% of its branded products, utilizing technology at every step through robotics, solar energy production, food protection laboratories, customer rewards and recycling processes. It is a family-owned and run business with about $7 billion in annual revenue.

“Don Zietlow, his family and co-workers have been expanding this innovative company for decades with no apparent end in sight. He’s a team player who exemplifies what it means to adapt to changing times while embracing technology and sticking with a culture of customer service,” said Tom Still, president of the Wisconsin Technology Council.

The June 3 conference will be held on a virtual platform under the theme of Building blocks for young companies. The “Seize the Day” presentation with remarks by Zietlow will take place mid-day.